FEBRUARY 29,2012
Baseline Residence February Updates
The promising project which boasts the prime of its location, is up with its completion rate at 12.48% as of February per reports of its Senior Project Manager. Baseline Residence, still managed to maintain a zero-accident rate. 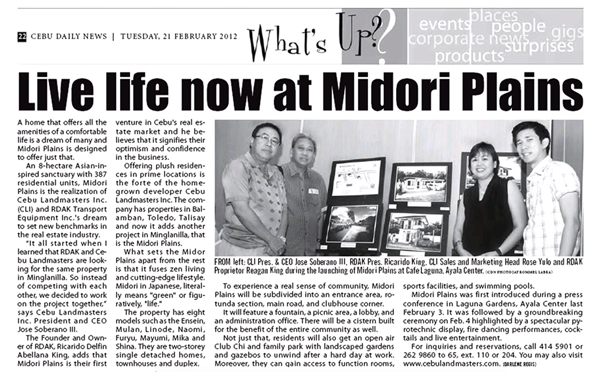 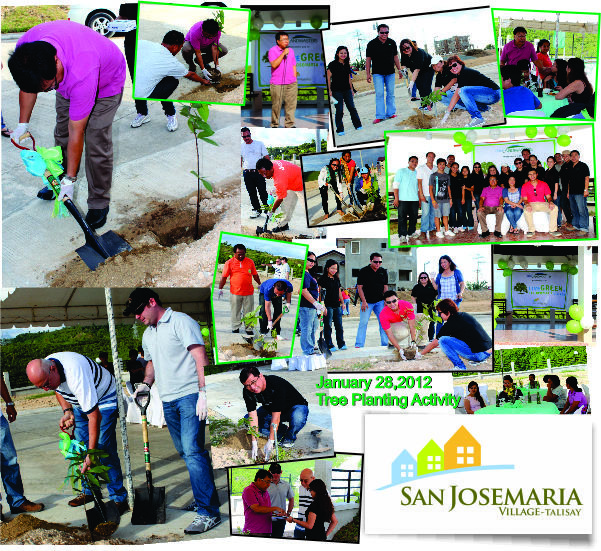 “You don’t plant a tree for yourself. You plant it for the world.”- a quote that will best suite the tree planting objective of San JoseMaria Village- Talisay.

On January 28, 2012, the activity with the theme “ Live green at San JoseMaria Village- Talisay” became a venue for the buyers, prospect buyers, agents & brokers, barangay officials, the CLI staff and partners to give back to mother nature as everyone planted trees around the subdivision.

Mr. Joe Soberano in his speech commended the site for its superb location and also its fantastic mountain and sea views. He is committed to retaining the green feel of the subdivision for healthier living.

The event was also graced by CLI’s partner for SJV-Talisay, Mr. Jose Sala and his son, Javee. This has marked the start of a wonderful relationship among neighbors in the community. It was a momentous event to celebrate nature’s beauty and goodness. More development updates soon to come. KZ Cortez-CLI
FEBRUARY 13,2012
Midori Plains Breaks Ground
Grand, gallant and green – Midori Plains broke ground on February 4, 2012 at Tungkop, Minglanilla, Cebu. The first joint venture project of Cebu Landmasters Inc. and RDAKLand Inc.

Sinulog Dancers entertained the guest while registering and what a crowd it was!

The event was formally started with a Eucharistic celebration followed by the actual ground breaking ceremony graced by representatives of both developers, ably assisted by representatives from the barangay, headed by Brgy. Captain, Desiderio Tan. On The Cover, the band that played wonderful music for both young and old alike. A sumptuous banquet was served to all guests who then later enjoyed a fire dance show and the grand fireworks display.

Midori Plains is a promising community developed to cater to the mid market. A true testament of zen living with first class amenities.
FEBRUARY 7,2012
P3B set aside for 3 ventures
By Katlene O. Cacho  Sunday, February 5, 2012

HOMEGROWN developer Cebu Landmasters Inc. is earmarking P3 billion for capital expenditures starting this year, for the development of three residential projects in Cebu under a joint venture with RDAK Transport Equipment Inc. (RDAKLAND)
Cebu Landmasters Inc. president and chief executive officer Jose Soberano III said the programmed capex will stretch until 2014.
The company broke ground last Saturday on its first residential project, Midori Plains, in partnership with RDAKLAND.
The project, which sits on eight hectares in Tungkop, Minglanilla, will house an initial 387 residential units with prices ranging from P1.6 million to P3.2 million.
Average lot area is 120 square meters.
Midori in Japanese term means “green.” Soberano described the project as an Asian-inspired, Zen-living development.
“The partnership of this project came in when I learned that RDAK and Cebu Landmasters are both eyeing the same property in Minglanilla. So we decided to work on the project together rather than compete with each other,” Soberano said, adding that this project is RDAK’s first venture in Cebu’s thriving real estate industry.
Branching out
RDAK’s core business is in the transportation and heavy equipment industry, which includes manufacturing and selling of several types of heavy, light and medium transport vehicles.
Ricarido Delfin Abellana King, founder and owner of RDAK Transport Equipment Inc., said their venture into property development signifies their optimism and confidence in Cebu’s real estate industry.
The two companies will pour in P500 million to develop Midori Plains, which will have nine house designs intended for the middle-class market. The firm also allotted some 50 lot-only units.
Midori Plains land development is expected to be completed within one year.
Among the amenities are Club Chi, which features a swimming pool, open-air pool cabanas, function hall and entertainment rooms; and a gazebo.
Aside from Midori Plains, Cebu Landmasters and RDAK are also set to develop two condominium buildings on A.S. Fortuna in Banilad and on Salinas Ext. in Cebu City.
According to Soberano, the A.S Fortuna project will have two 12-storey condominium buildings with 198 units each. This condo project is being pitched to the middle-class market, such as young professionals, with unit prices ranging from P1.3 million to P1.6 million.
The Salinas project, on the other hand, will have seven mid-rise condominium buildings with a total of 1,200 condo units. This project is programmed for a three-year development.
According to Soberano, the low interest rate, strong domestic liquidity, huge housing backlog and strong inflows of remittances prompted them to be aggressive in building property projects in Cebu.
Familiarity
Cebu, he said, has always been a hub for work and education.
He added local players like him are not threatened by the coming of big players in Cebu, as the province records a huge housing backlog.
“They may have dominance in certain markets but local developers here have a good head start in the real estate environment because of our familiarity with local conditions,” he said.
His company, for instance, is eyeing the middle market who can afford to acquire houses with prices ranging from P1.5 million to P3 million.
Cebu Landmasters’ first residential project is San Jose Maria Village in Balamban in 2003. Since then, he brought the brand to different areas such as Minglanilla in 2007, Toledo in 2009, and Talisay in 2010.
The company made its first foray into vertical development with the 17-storey high-rise condominium project called Asia Premier Residences at the Cebu I.T. Park (formerly Asiatown I.T. Park). This was followed by the construction of the 18-storey residential condo the Baseline Residences along Juana Osmeña St. last year.
Soberano said there are more residential subdivisions being eyed by the firm in Tagbilaran, Cagayan de Oro, and Ilo-ilo cities, as part of their positioning to become a significant community developer in the Visayas and Mindanao.
Published in the Sun.Star Cebu newspaper on February 06, 2012.